If you’ve ever been on a film set, then you know how exciting it can be. There are so many things going on at once, the camera crew is moving the camera and re-loading the film case, the director might be talking to an actor or actress about the next scene, the producer is looking at his or her watch, wondering when the next shot is going to happen and so on and so forth. 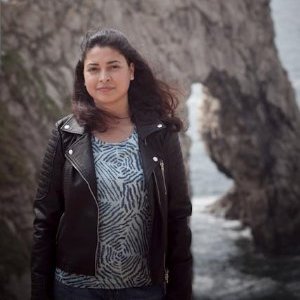 It can be quite glamorous because of what is actually happening. Roona Mukhopadhyay, the Indian filmmaker, would tell you that it’s not the busy-ness of the people involved, but what they are all doing there. They are attempting to create a story that looks so incredibly real that the audience, when they see the final version, will be able to suspend their disbelief that they are really sitting in a big dark room watching some unreal 2-Dimensional images that appear to be humans who are experiencing some kind of conflict or pleasure. The whole thing is crazy if you think about in those real terms.

However crazy it may seem though, several billion people go to the movies every week just to experience and observe that 2-Dimensional un-reality and they come out of the theatre (hopefully) slightly changed because of it. Roona doesn’t think it’s crazy at all because she has been watching and loving movies since she was a child in India. She knew from an early age that she wanted to be a part of the film industry and she knew that she tell stories through the medium of film and Television.

She has been on countless sound stages, and has worked as a Director, producer, writer, editor, camera operator, location manager, line-producer, assistant director, production manager, casting director and among other things, an actress. Before she came to Los Angeles, she worked on numerous Bollywood films in India and London. She actually knows what it’s like from a producer’s point of view to look at her watch because she knows that time is money when shooting a film. She also knows what it’s like to have to change the film magazine quickly between shots and soother actors’ feelings before or after a scene. The magic of walking onto a shooting set hasn’t worn off for Roona and it most likely never will. She loves the everyday magic of watching movies and of making them as well.