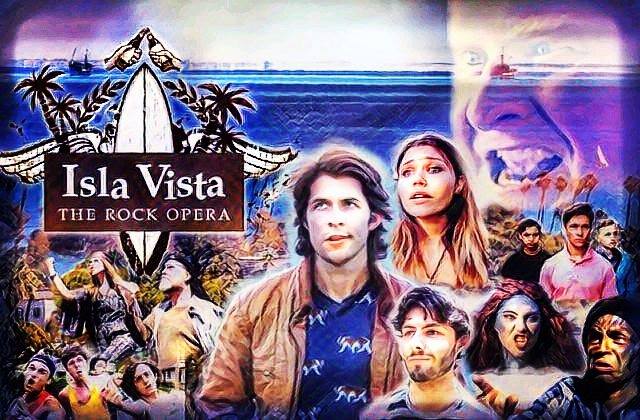 Isla Vista–The Rock Opera is a pioneer production in the largely unexplored genre of comedy musicals. The 6 Episode, 13 Song Musical Odyssey was written and directed by Adam Courtin. It celebrates the reign of youthful abandon in college towns like Isla Vista, and runs on themes of young love, environmentalism and career confusion. Not to mention, tunes that are guaranteed to stick in your head.

Ellie Patrikios is a lead character in the musical that is now in the final stages of production.

Q: Please tell us more about this exciting production?

A: Isla Vista- The Rock Opera, is a creatively illustrated depiction of what nearly every College Student goes through toward the end of their degree. This clever production uses integral characters to display wide human calibers – The Hippies, The Hobo, The Slumlord… etc.

The film focuses on College Student Sam (Adam Courtin), his best friend Tim (Chris Poole) and Sam’s Girlfriend, Alice (Ellie Patrikios), all with contrasting objective goals for now and the future–with the distractions, the ups and downs, chaos of environmental disasters spoken out loud by Jess The Hippie (Jess) which are being ran by sleazy, mean, “Moneybags Slumlord” (Dennis Hurley). It is a heroic tale, and a journey of friendship and morals.

Beyond it’s notorious reputation as a college party town, Isla Vista was the birthplace of Earth Day following the 1969 Santa Barbara Oil Spill. Its history of rampant activism plays a large part in our story, with special relevance today. This is the musical comedy that Isla Vista- and all college towns- deserve.

A: I play en je nu (a Zooey Deschanel type) Alice (Sam’s love interest) a conservative Sorority Tomboy, who blossoms throughout the story into a mature, diplomatic young woman. She’s an aspiring manager, but she just doesn’t know what she wants to manage.

Q: How do you relate to the character?

I relate to Alice with my own similar experiences from graduating College, the feelings I felt – questioning what my next move would be, my love life, and the immediate uncertainty that surrounds, until one can get direction. Of course with the underlying background of the films issues being environmental I relate strongly to certain principles bought out in terms of having a valued means to an end with preserving nature and the environment.

Q: Where was it filmed?

Isla Vista, the Rock Opera couldn’t have been filmed in a more set in stone location than Isla Vista itself, in California’s beautiful Santa Barbara. It was a great commodity to film a musical based in such real surroundings, each day learning and reminiscing over the triumphs of this (now) more rowdy college town with remarkable beauty and life.