Tarun Sagar ji is a very popular Digambara monk. He is quite famous all over India and overseas and his kadve pravachan is liked and are admired by all his followers. All his pravachans and lectures are known as kadve pravachan as they are far more critical as compared to the practices that we follow in our day to day life. Most of his lectures include social and family issues which some other monks may avoid to talk or discuss about. 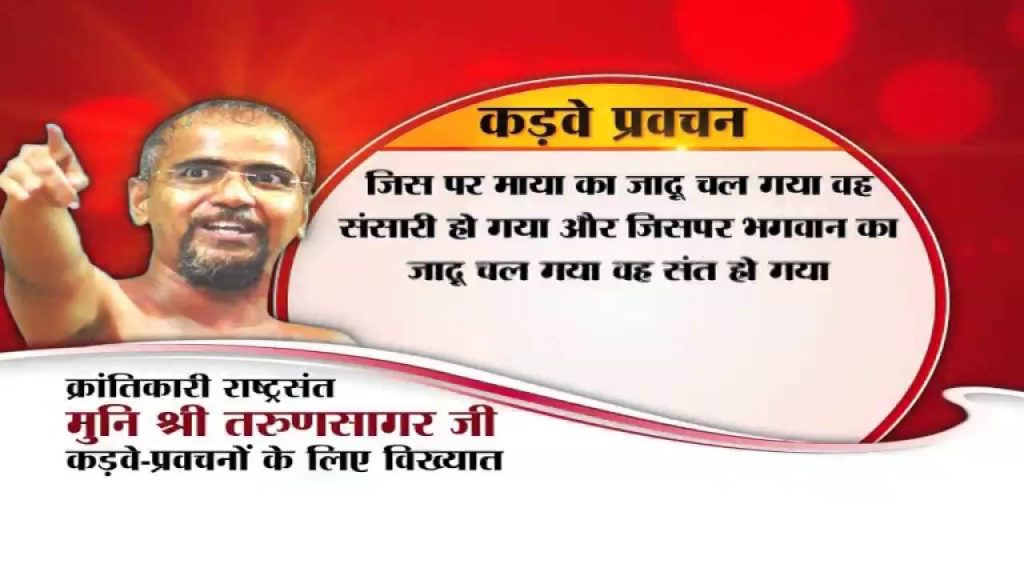 Most of his disciples and listeners are non- Jain. Some of the excerpts from his preaching and lecture are published in some of the well known newspapers. Recently his book is launched which is named Kadve Pravachan and has the complete compiled form of useful and positive thoughts for life.

How he is different from other monks?

While the other Jain monks usually do not prefer interacting with the politicians, Tarun Singh ji meets them frequently sometimes as a guest and sometimes as a guru for them. Though he is from the Digambar School he highly promotes for non- believing in sectarian views and points. Kadve Anmol vachan hindi is also available which is compiled by Tarun Sagar ji.

In the Year 2009, he was invited in the Vijaya Dashami function organized by RSS. It was organized in Nagpur and there he announced that the use of leather belt is an open sign of the promotion of non-violence and thus he wanted all his disciples to replace it with the canvas belts. He is quite neutral about the politicians. He at times praises them for their good work and sometimes criticizes when he finds them doing something wrong or something anti-society.

Talking about his life:

Tarun Sagari ji was named Pawan Kumar when he was born on 26th June in the year 1967. His father’s name was Pratap Chandra Jain and his mother’s name was Shanti Bai Jain. He was born in a very small village named Guhanchi, Madhya Pradesh. He was initiated as Kshullaka at a very young age of 13 as the Digambara monk by the acharya Pushpdantsgar in the year 1988 in Rajasthan when he was around 20 years old. Gradually he became a very prominent personality when the local television GTV started a program- Mahavira Vani. Now he is one of the well known and very famous personalities when Kadve Pravachan comes into lime light.

Some of his newspaper articles: