Tell us a little bit about yourself, what brought you to Hollywood?

So I was born as Teresa Wagner in Vienna,Austria but I always thought that name sounded way too ordinary for me so everyone has been calling me Tea as long as I can remember. Growing up I always had a passion for the performing arts – I wanted to become a singer for the longest time until I discovered how much fun acting is as well! After I watched Hannah Montana I knew what I wanted to do with my life and spent all my youth taking acting, singing and dancing classes as well as performing in musicals, movies and other projects in Vienna. To learn from the best I spent a lot of time in Los Angeles and immediately fell in love with the city so I decided to study abroad in order to experience everything first hand and moved here last year!

That sounds amazing, what training would you recommend? 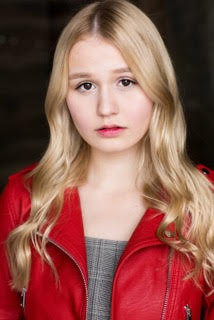 I’ve been trained at so many different places and they were all super educating – I wouldn’t trade the experience for anything else! Here in LA I started at the Lee Strasberg Institute which focuses on the Method, as well as LAPAC, the Actor’s Space West, Joey Paul Jensen or The Scott Sedita Studios which specialize in Sitcom and are the most fun! I recently started at the Michael Woolson Studios which I never want to leave because the classes are amazing and I’ve also taken private lessons with Jeanette Brox for over 6 years and Kaley Hummel among others! Every education is a step in the right direction in this industry so if you ever feel like learning a new skill like a new language or sports – do it!

What have you been up to lately, any new projects coming up?

It’s been super busy ever since I moved here! I did a huge amount of short films and all kinds of different projects! Recently I had the honor of singing both title songs for the super popular kids show “Tayo the little bus” as well as being the german voice of little bus Gani. The title song accumulated over 170 thousand views in a month already! Also the first feature film I shot called “The Chicken Party” is about to have its first screening before starting its festival run and I’m also shooting another short film by award winning director George Moïse next week!

What do you think 2018 is going to be like, do you have any future goals?

I hope 2018 is going to be just as stressful as 2017 because I love being busy – I want to work as much as possible! Maybe some co-star or guest star roles when Pilot season comes? Or even a series regular? That has always been one of my dreams, I love comedies and sitcoms so being part of one is definitely on my list!

I believe if you really want something it’s going to come your way eventually so don’t give up – you’re just going to regret it later!