Please introduce yourself to the readers and how and when did you first get into performing?

My name is Annika Pallasch, and I was born and raised in Germany. I’ve loved performing since I was little but I didn’t get serious with it until I was high school.

What inspired you to get into the entertainment industry?

I would say my love for television shows. When I was 11, I completely fell in love with Supernatural, and after that Gilmore Girls (many more followed). I like the idea of being able to take someone’s pain and worries away for an hour or two because they’re captivated by a different world, which is what those shows did for me.

What kind of training have you had, if any?

I completed two 1-year conservatory programs after I came to LA. I was taught in various techniques and subjects by a lot of great teachers, which included anything from improv and (classical) scene work to on-camera techniques, script analysis, and film history. 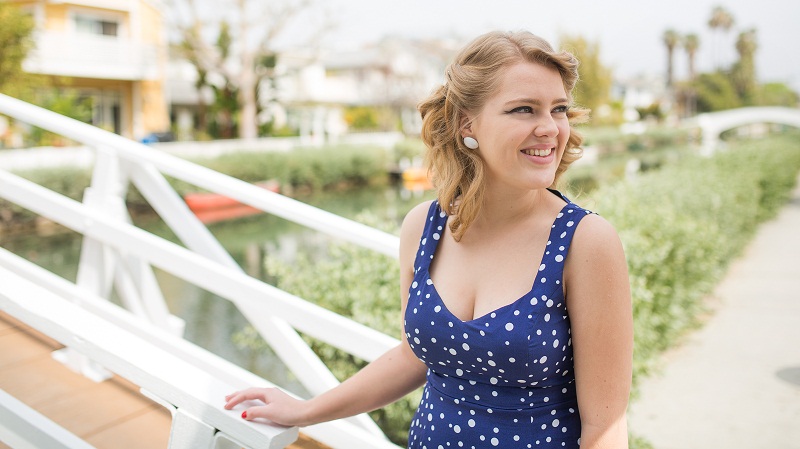 What has been your favorite role to play so far?

That would be Stacy Gwennifer on the web series “Black Spider-Man”. I’ve been playing this role for over 3 years now and I also produce the series, so I’ve put a lot of heart, energy, and effort into this character and project. It’s wonderful to see how far we’ve come and how far we can still go.

What has been one of the most exciting achievements of your career so far?

The most exciting and surreal moment was when we (series creator Derek Reid and I) performed with our improv team Comic Book Live! to promote Black Spider-Man at San Francisco Comic-Con last year (2016). After the show, a fan came up to us and she told us that Black Spider-Man was extremely popular at her high school. We took pictures, and I signed my first autograph! I don’t know who was more excited, her or me!

What projects do you have coming up?

We’re currently working on more Black Spider-Man episodes and there’s always a comic-convention in or near California coming up, where I perform with Comic Book Live! But I have some ideas I can’t wait to turn into a script and eventually make that movie or series.

Chris Evans and Hayley Atwell. I just admire them both so much, and I think it would be a lot of fun. I’m also really curious about their approach to a scene and process on set. My favorite director to work with would have been John Hughes, but sadly, that is not a possibility. But there’s a lot of other actors and directors I would love and be honored to work with.

What are your plans for the future?

I just want to continue working as an actress in LA. The only real goal I have is to continuing being successful with acting and eventually, start a family. And to even be in a Marvel movie or TV show, that would be the ultimate dream come true.

What is your advice to aspiring performers?

Really listen to what your teachers and the people around you have to say, you will definitely learn a lot. But also let that help you figure out what you think is right and works best for you, there is no definitive answer to things. But most importantly, be exactly who you are. Don’t give up or change any part of yourself for anyone else, it’s not worth it. In the end, what matters is that you are happy with yourself and your decisions. Follow your heart and believe in yourself!