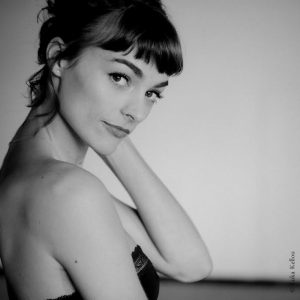 Acting for Romane Portail is a work in progress. She sees it as an on-going process that involves constant training, observation and rehearsal. Getting into each character she plays takes an enormous amount of concentration and she feels very fortunate that she had some of the best training an actor could have.

Romane was raised in a small village near Orleans, France and lived above the restaurant that her mother owned. She and her sister considered the restaurant their living room, where they not only ate their meals, but also would often times come down to see their mother dressed in their pajamas. She feels that the casualness of being around strangers (in the restaurant) so frequently she was not very self-conscious and unafraid of being in front of people either on the stage or in front of the camera. Of course, that made it easier for her to go into acting and perhaps even drew her in to that line of work.

Romane also feels that she is someone who needs a great deal of freedom, which also propelled her into a career that can be challenging both psychologically and financially and has no bosses and no regular days – which can be totally frightening because actors have regular bills to pay just like everyone else. On the other hand, she knows that she can get bored quickly so acting professionally allows her to be creative and offers the opportunity to experience new things and express different feelings and meet new people on almost every shoot or project she is involved with.

She has been in too many TV shows and movies to talk about here and she has established herself as a highly professional actress in Paris, London and Los Angeles, where she recently signed with a world famous talent manager. She lives in London but traveling back and forth from France and L.A. is just part of her life now and she loves it. A few of the movies that Romane has performed in are Le Garcon, On Voulait Tout Caser, Hostiles and Fujita among others. She can also be seen and very much appreciated in Sense8 and Urban Jungle, which is a great concept of a webseries. It is presented in 10-minute episodes and tells the story of the world’s animals in revolt against humans. Romane has the starring role in this terrific series and she is indeed perfect if it.