Rumor has it that some people think in numbers and some think in color and people who live in the world of music…no one knows how their incredible minds think or what images are conjured up in their constantly creative minds or even if the color spectrum is alive and well in there.

Of course, none of that really matters in the long run because great musicians and composers enhance the universe with the beauty of rhythmical sounds that they somehow manage to string together so perfectly. The melodies and arrangements of different instruments all playing at the same pace can tell a story or make an already filmed story even better. Composers and orchestrators like Nami Melumad are experts at both. 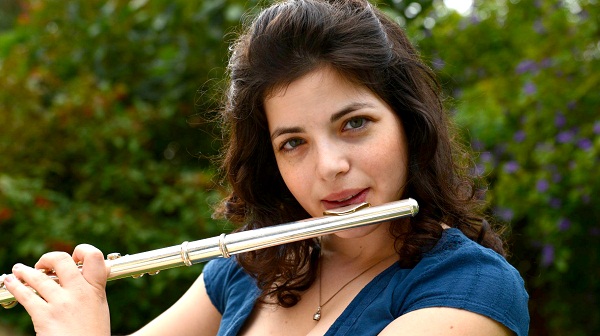 Nami composes original music for films and media at Magic Productions, an entertainment production company that specializes in documentaries and commercials. Her experience is remarkable, orchestrating, composing and arranging for top-notch establishments as the Haifa Symphony Orchestra and the Sinfonietta Be’er Sheva orchestra. She previously recorded music on the famous Newman Scoring Stage at Fox Studios (65 piece orchestra!), Capitol Studios, the Eastwood scoring stage of Warner Brothers, East West studios, and the John Williams Scoring Stage.

Where does this orchestral knowledge come from? Nami has been playing music almost all her life and she plays several instruments including the piano, guitar and flute, for which she earned a Principal Flutist Scholarship at Jerusalem Academy of Music. Growing up with an orchestral background and performing with orchestras Nami a wide understanding of musical instruments, ranges, capabilities and technicalities. Her grasp and understanding of musical colors gives her an advantage over most composers.

Due to her outstanding work both as a composer and as an orchestrator, Nami recently received significant recognition from ASCAP (The American Society of Composers, Authors and Publishers) when she had been selected to their acclaimed, highly distinguished film scoring workshop. Chosen from hundreds of applicants, Nami was honored to participate in the sessions led by the legendary film composer Richard Bellis. Most past participants of the workshop are now successful composers, for example Mateo Messina (Juno), Joe Trapanese (Straight Outta Compton), Trevor Morris (The Borgias), Matthew Margeson (Kingsman: The Secret Service), Rob Duncan (Castle).

Orchestrator Pete Anthony, who worked on over 330 films including blockbusters The Hunger Games, Malificent, X-Men and Ice-Age, praised Nami’s orchestration skills, saying she demonstrated an extremely high level of orchestration, the kind expected from an orchestrator who has decades of experience.

She composed numerous film scores many of which have gone on to win high praise and awards including At Last, a film directed by Anna Skrypka, which was nominated Best Original Score at the Huston Comedy Film Festival. The comedy score created by Nami was cool, fresh, and supported all the fun moments of this lovely and quirky film. The acting was great, too, but the scenes are enhanced by the music which makes it funnier. The score has a leading role in that it carries that film’s quirky vibe. The film received wide recognition in many festivals and is currently in distribution process.

Nami has created original music for the big hit Behind The Blinds, which is a show about a couple of Eastern European mob guys who think it’s a good idea to become movie producers in order to launder some of their illegal profits for mob activities. The show is smart and funny, and the music is very different in every scene, a challenging task for some composers –sometimes scary, sometimes funny, sometimes romantic. Nami successfully captures the essence of every scene and still manages to create a coherent, memorable and super creative score, with re-occurring themes accompanying the characters when they appear. For example, the character Lola – the rebel teenage daughter of one of the mobsters –has her own tune/theme that makes her so unique and cool every time she is on screen. You really want to hear more of that melody. It’s trouble impending, but also sophisticated, clever and sexy, just like Lola’s personality. In the series premiere, at Raleigh Studios in Los Angeles earlier this year, the score itself received many praises from several producers including Dan Frisch who said it was ‘fantastic’ and he absolutely ‘loved it’.

Melumad’s works with Israeli filmmakers as well. Contacts, directed by Nir Berger and Yogev Yefet, is a huge parody hit in Israel, that makes fun of technology and apps we all use like Instagram and Tinder. The series started as an online only series short films, but when it made a significant impact and became viral (over 2 million views), Contacts was released on various TV programs and in cinematheques across in Israel, receiving critical and commercial success. It also received wide recognition in festivals in New York City and Hong Kong, where it won first prize at the International Mobile Film Awards. Nami’s music, especially for the second episode – Tinder, is a fantastic mixture of styles and genres, and is really serving the comedy moments. Between urban beats, to westerners music (wild wild west), to over-the-top romantic themes, the music quickly sells the entreating moments.

Nami has produced quite a large body of work, creating original scores for numerous movies, shows and games, but also- for theatre and the art of dance. She previously won the The Gertrude Kraus Composition for Dance Competition, for an electronic piece that really expanded the boundaries between sound and music. It mirrors the dance, that explores the boundaries between movement and dance. She also wrote music for two theatre shows that were a commercial success at Tsavta Theatre (Tel Aviv).

Nami and her work have also been honored by Women in Film, which listed her as one of their success stories. Women in Film, by the way, is a non-profit organization dedicated to promoting equal opportunities for women, encouraging creative projects by women, and expanding and enhancing portrayals of women in all forms of global media. There aren’t many women composers in the film industry, which is why Nami’s success is empowering to others.

Nami was also previously honored by the Society of Lyrics and Composers. Furthermore, while she was studying in Graduate School at the University of Southern California, Nami was honored by the dean to receive the Thornton Board Mentorship, an honor which was received for four students only. These achievements are all due to her talents and hard work.

To conclude, we may not be able to imagine what goes on inside the minds of composers and musicians like Nami Melumad but the results are what really matters and Nami’s compositions are masterpieces, especially when combined with visual storytelling.