Valencia is an interesting city to visit in Spain, other than the more popular Madrid and Barcelona. Its architecture is a perfect combination of modern and gothic designs. In essence, Valencia is a true cultural and visual feast. There are leisure centers, sports facilities, beaches and museums that we can visit. The Valencia Airport is probably the primary entry point that you’ll use. The city center is about 10km away, which can be reached with buses or taxis. Train service also passes Valencia from Barcelona and Madrid. The city is about 3 hours drive from Barcelona through the A7 toll road. From Valencia, travellers can use the ferry service to the Islands of Mallorca and Ibiza. The Congress Centre is the place to go when we want to visit the city’s arts and science center. L’Hemisferic is a half-sphere structure with enormous metal components. Visitors can see projected 3D Imax film in it. To this day, it is considered as one of the more significant modern architecture in Valencia. It has become the subject of discussion for numerous architecture professionals. 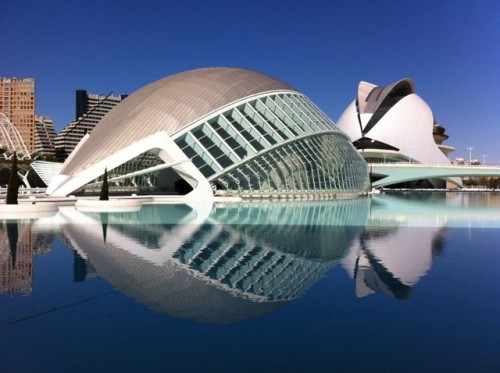 The Reina Sofia Palace of Arts is considered as the jewel of Valencia and it is focused for music, theatre, dance and opera. It has a hge symbolic sculpture that gives us the feeling that it moves. The palace is built and designed by Santiago Calatrave and it is full of various architectural surprises. Another place to visit is the Principe Felipe Science Museum and it is dedicated for educational purposes. The museum structure is built from concrete, glass and iron. Technology and modernity are two main themes of the museum. The L’Umbracle is a huge central promenade covered with sculptured steel. It is a modern structure that’s pleasing to the eye and it is the place for travellers to stay for awhile before proceeding to other parts of Valencia. L’Oceanografic is a big underwater city at about 80,000m2. It was designed by Felix Candela and probably the biggest aquarium in the Europe, in terms of volume of water contained and variety of marine species.

Valencia is an ancient city and its old town district is located around the Casco Antiguo. The area is popular for remnants of Visigoth, Roman and Arab civilizations. Excavation in the Plaza de la Almoina unearthed artefacts from the Roman era. The old city was originally a walled settlement, with long walls and many towers. Two of the remaining towers in Old City are the Serranos and the Quart. Both towers were also used as prison to hold captives. Like many old cities in Iberian peninsula, there are many historic buildings in Valencia. In the city alone, there are a total of 24 museums, most of them are dedicated to history and arts. Travellers could also experience the wonderful beaches of Valencia. There are four major beaches in the city, all with fine golden sand. Nightlife in Valencia is also exciting, there are concerts, theatres, casinos, discos, fiestas and flamenco.