With the start of the 2015 Rugby World Cup in England and Wales less than three months away, the euphoria and excitement is building across millions of fans who want to see the best teams in the world come head-to-head in an enthralling tournament. Preparations are already under way across the sixteen participating nations, with training camps allowing the coaches to see which players are fit and ready to go, or are putting their name forward for a starting berth. England, for example, have assembled a 50-man camp which includes Danny Cipriani and former Rugby League star Sam Burgess, with Stuart Lancaster overseeing a strong squad that has a good chance of triumphing on home soil. Fans may turn to previous World Cup footage in order to get themselves in the mood for the upcoming tournament, but they may also opt for the wonderful Oscar-nominated film Invictus which epitomises South Africa’s attempts to enter and win the 1995 World Cup in an effort to unite the country in the wake of apartheid. They are now regarded as one of the favourites to win this year’s tournament, but they may not have become the powerhouse they are today if it were not for the intervention of Nelson Mandela and Francois Pienaar. 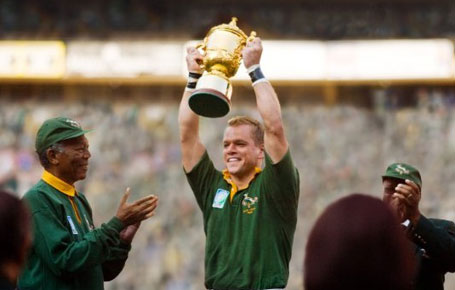 Based on an inspirational true story, Invictus, directed by Clint Eastwood, tells the tale of Nelson Mandela (Morgan Freeman) who becomes president after spending time in prison and sets about uniting a country that is torn by racial segregation. The racial and economic divide threatens to tear South Africa apart, and although apartheid was officially ended after Mandela won the multi-racial democratic election in 1994, he took control of a country that was still separated. He strongly believed that he could bring the people of South Africa together through the universal language of sport, and turned to the captain of the country’s rugby union team Francois Pienaar (Matt Damon) to be the instigator for the beginning of a united nation. Mandela and Pienaar are focal points behind South Africa’s march towards the Final of the 1995 World Cup, which they won 15-12 against a heavily-fancied New Zealand side; although the team lifted the trophy, the victory was much more important from a political perspective as it brought the whole of South Africa together and begin a positive post-apartheid era in the country.

The film, unsurprisingly, was a big success with rugby fans, in particular South Africans who believe it tells the story in a beautiful and evocative way to resemble how all the turmoil and racial hatred was lifted by the power of sport. Freeman and Damon excel in their roles as Mandela and Pienaar respectively, although it is questionable whether the latter was suitable for the role given his lack of stature and body size compared to the powerful figure of Pienaar, who was hugely instrumental in South Africa’s World Cup triumph and, more importantly, the unity of his country. Eastwood, in one of his first films as a director, does an excellent job of retelling the story on the big screen, particularly as rugby-based films are extremely rare and go not get the billing some may feel it deserves, but choosing such a powerful story that viewers can learn from and see how much it meant to South Africa was the right decision. Avid rugby union fans may be disappointed by the lack of action on the pitch that is included in the film, but it is the ideal film to watch in the lead-up to the 2015 World Cup to get fans in the mood and feel passionate about the sport.