Getting started with your own ATM business can be exciting. ATMs have an amazing and simple business model going. By starting an ATM business as an entrepreneur, you’re investing into a vending machine that’s in the business of selling money. Money doesn’t spoil or expire, and through transaction costs, you can make a great profit as long as you put an ATM in just the right spot. They’re also commonplace all over the world. In some cases, like in Dubai according to Banktech, they’re even used by most as a way to pay the bills. In the States, ATM transactions are up 4 percent from last year according to NCR. That right there is potential. 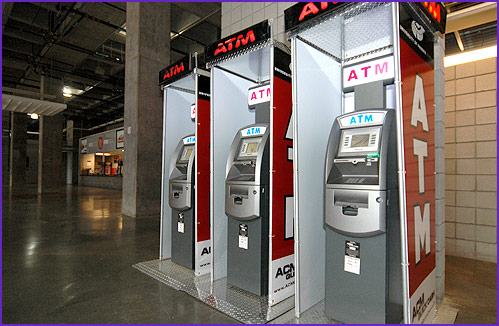 But that’s where the pain begins. Not only are ATMs themselves expensive and require a heck of a lot of capital to begin setting up, but installing and actually getting an ATM running at a location is also an additional high cost.

Even with used ATMs, installation costs are no joke, which is why location hunting for ATMs is half the trick of running a successful cash machine business. With keen business insight, intuition, and the right set of skills and knowledge, you could very well make a fine profit through an ATM business.

However, you may not have to worry about such high installation costs with a wireless ATM. Wireless ATMs are definitely coming into fashion.

An automatic teller machine traditionally required a hard line in order to have direct connectivity to the network that allowed it to communicate with banks, update bank information, and actually inform customers how much money they have in their accounts, and allow them to withdraw some of it.

That hard line was the standard for several reasons. Firstly, it allowed speed and efficiency. Secondly, it was safe from tampering and other security issues. But since then, advances in internet speeds, connectivity advances, and today’s standards in cloud technology and encryption have made it so that wireless ATMs are, according to ATM Marketplace, quickly becoming the new standard for cash machine technology.

ATMs are expensive to install and relocate because of the setup of a hard line to a bank network, to facilitate the access of bank accounts through debit and credit cards. But if you as an entrepreneur invest in wireless ATMs, you’ll be looking at a whole different ballpark of costs and potential profits.

How to Find a Wireless ATM

Your best bet for wireless ATMs is online, through ATM providers. You can find wireless ATM machines on retailer websites like ATM Money Machine, or directly through the individual companies that currently offer wireless ATMs as part of their offerings.

Alternatively, you can physically contact a company’s local representative branch and ask them directly about buying into their franchising business. If you’d like to run your own company, inspecting the resale market for wireless ATMs is a better option.

As with any ATM, wireless ATMs can be distinguished from one another by the company that sells them. ATM distributors that offer you better services are typically the best choice.

Another factor that needs to be considered heavily is security reputation. Reputation can be researched online in the case of big brand ATMs. Otherwise, asking them directly for testimonials or possible referrals can help give you an idea of who you’ll be dealing with, and thus tell you something about the quality of their product.

Where To Get Best Printing Supplies For Offset Printers?

Start Up, A New Concept In Entrepreneurship