Through the years, I’ve tried a lot of sports I had no business trying. I’ve been in some mean scrapes that I was entirely ill-equipped to survive, and yet somehow came through. However, the year I joined the coaching staff for sorority flag football was the deepest, darkest ongoing state of peril to which I have ever subjected myself. Men and women both have a recognizable Jekyll/Hyde function, but I have never seen the female variety in such textbook form. Oh, the practice was a joy, a festival of team spirit and movement, artistic and zen-like. Then came opening day, and here is what I learned.

In sorority flag football, the flag is a fashion statement, nothing more. Unlike the other houses who sported tall, speedy gazelles, my Tri-Delts were built like tough little refrigerators, mean and pushy once the whistle sounded. It simply made sense to them that they should use that quality to their advantage – fair enough. By half-time, game 1 of the season resembled a tag team match between the Chainsaw Brothers and The Flying Lebron skips. Both teams carried so many players off the field that it was almost called. 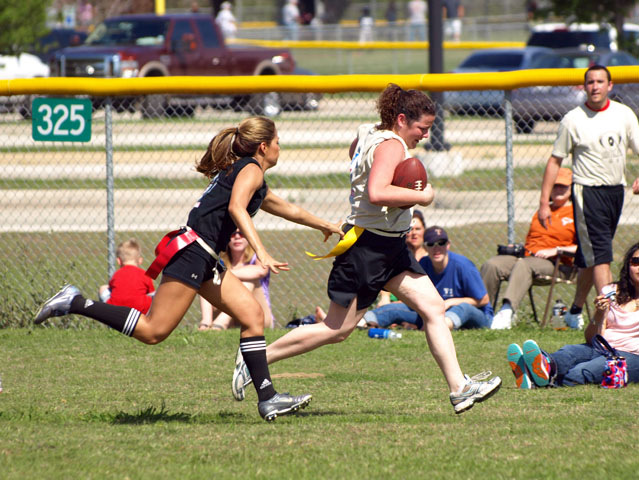 You can really get hurt just being around these people. My quarterback could throw a bomb that would be the envy of a major conference QB. She had a gorilla’s arm, and we scored more than once with her amazing and fairly accurate distance. Unfortunately, she threw it every bit as hard at five yards as she did at fifty. The tiny fracture in my rib during passing drills taught me never to look away again when the cannon lady held the ball.

Imperfection in any form suddenly became intolerable. We had the most gifted free safety imaginable. She intercepted two in the first half and broke up everything else. It took us an hour to convince her that she hadn’t failed by not intercepting every ball thrown. She’d already booked therapy sessions, changed her major and had the car packed for home before we talked her down. Mel Renfro would have loved her stats.

Suddenly, it all stopped. Leaving the field soaked in blood and strewn with hair and fingernail fragments, my nightmares on Elm Street transformed again. Teams were huddling, chanting happy sentiments and kissing each other. They burned the playbook at the season’s end and thought it was great fun. So they never won a game. So what?

I walked away, though, feeling that maybe the NFL was overlooking some of the most vicious hitters in America. I wouldn’t have wanted to be in there. Lucky thing that I was just a guy.